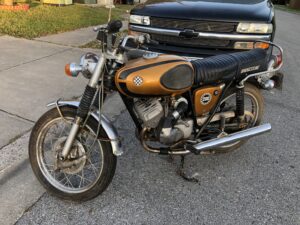 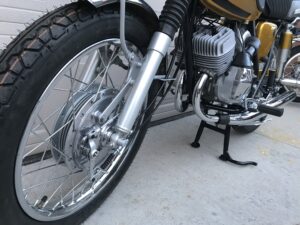 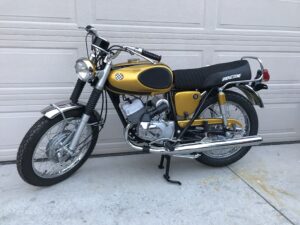 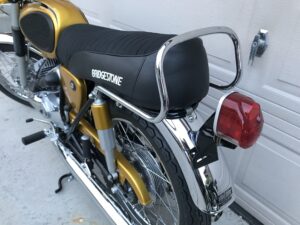 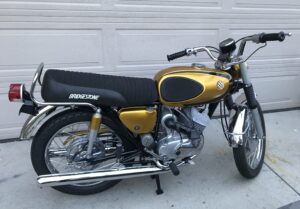 Tell Us Your Story!  Most people don’t know this but Bridgestone Tire is a Japanese company. What is even less known is that in addition to tires, Bridgestone started making bicycles after World War II which eventually led to the production of small motorcycles. Through the 1960s and early 70s Bridgestone had a reputation for high quality and exceptionally high performance motorcycles. Advanced features including Nikasil-lined aluminum cylinders, rotary valves and 6 speed transmissions allowed Bridgestone to dominate other manufacturers during their relatively short production run.

Today Bridgestone motorcycles are very rare and very desirable. However, NOS parts are almost non-existent and reproduction parts are quite limited. This makes restoring Bridgestones to a perfect original extremely difficult.

Through a collection of Bridgestone enthusiasts I heard that someone in Central Texas was trying to get rid of one. When I contacted the owner about selling it he said he would give it to me if I would pick it up ASAP. I was skeptical, and concerned it might be stolen but the owner said he had the title. Unfortunately I live in Colorado and couldn’t pick it up in his time frame. Thankfully I have an old friend from my body shop days in Texas that lived very close to the owner so I called in a favor. It is a big ask to have someone pick up a rusty mess and store it in their garage indefinitely.

About 8 months later I made it down to Texas where I picked up the bike and took my friend to dinner. I owed him a lot more but he wouldn’t have it.

The bike turned out to be crusty, unloved and neglected but it was low mileage and most of the original parts were there. The motor also turned over which is a huge plus. After several weeks I had it running very strong and it was originally my intention to just to clean it up and ride it. But as it seems to happen, the next thing I know it was stripped to the frame as if a motorcycle bomb had detonated in the garage.

The restoration took almost a year. All of which I performed myself. As expected, sourcing parts was the most difficult part of the job. The frame was stripped and painted. I polished all of the aluminum and replaced the wheels and spokes with similar Japanese parts. The cables are unique to this bike and had to be built by hand. One cable splits into two another splits into three. There is no room for error on these. I salvage as much of the original hardware as I could. I have my own nickel plating operation so although it is tedious, I can restore my own hardware. Of course the chrome had to be outsourced. I also have a small paint booth and perform all of my own paint work. The paint turned out flawless and I’m quite proud of it. I had custom decals made to replace the originals and give the bike a “right off the showroom” feel. This included reproducing the dealer’s decal that was applied to the rear fender when the bike was new.

In the end the restoration turned out even better than I expected and is probably one of the finest examples of a Bridgestone MKII RS200 in existence. Thank you for allowing me to share my passion for unique motorcycles and express the time and effort required to perfectly preserve these treasures for the next generation to enjoy.