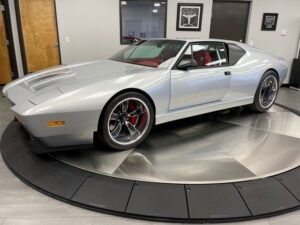 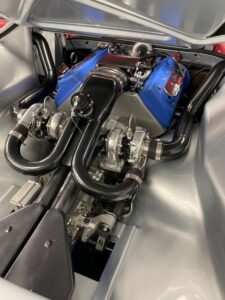 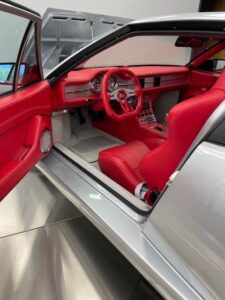 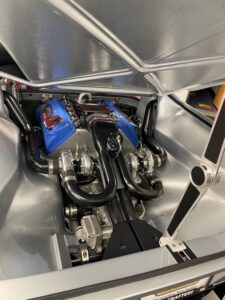 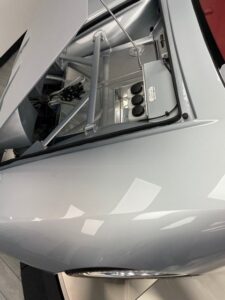 Special Modifications: This 1973 Pantera was built by Car Crafters.

The car we chose for this build was a 1973 Ford Pantera. We decided to do a build based on a factory GTS-5 style Pantera
modernized with modern styling cues, drivetrain, suspension, steering and braking without sacrificing the original look and feel
of DeTomaso’s design. We began the body redesign by extending the nose and growing the fenders to become more reminiscent of the original GTS-5 car, but with a modern twist. The front of the car is still chiseled in its very straight body lines and smooth curves as the lower splitter and extractor hood add to the  styling. The cowl has been smoothed and the front windshield flush fitted along with the removal of the drip rails for a cleaner look. To give the effect of a lower car we added steel box rockers down the sides of the car leading into the huge rear fenders which cover 19” x 13” wheel size and 345 wide tires. The rear of the car grew to except the rear diffuser. The original lights were used throughout the build with the exception of the half opening front HID headlights.

The powertrain it is a Ford rebuilt, Terminator 4.6 liter, forged bottom end built for the 2003-2004 Supercharged Cobras. The blower has been milled off and an intake fabricated to accept the twin turbos from the rear of the car. The cold air for each turbo is
taken through the side scoops which also serve to duct air into the oil and water coolers on the driver side and on the passenger side the air-conditioning condenser. The rear wheel wells are louvered at the front to create a negative pressure to draw the air out as
the fans are pushing air through the coolers on each side.

The transmission has been upgraded to Porsche 930 Turbo CV joints with a solid axle shaft. The clutch, brake and gas pedal assembly is a Tilton racing design that has been changed to make more room for the custom fuel tank moved under the hood to make room for the modern engine and the addition of power steering and air conditioning. The front brakes are from a 2014 Ford Mustang and the rear brakes are 2004 Ford Cobra front brakes modified to fit the stub axles and uprights on the Pantera with 6 piston front and 4 piston rear calipers.

The interior is also modernized starting with modified Recaro seats covered in a combination of red leather both perforated and non-perforated style sitting on dropped floor pans to accommodate taller drivers. The more modern radio and switch layout to its custom aluminum and stainless trim dash panel with modern gauges. The roll-bar adds chassis stiffening as do the front and rear crossmembers built to add structural rigidity.

We feel we accomplished the goal of a modern GTS-5!